Founded in 1997, Netflix has had a long and tumultuous history leading up to its current status as one of the leaders in streaming subscription services. Originally pitched to Blockbuster before being ironically rejected, Netflix has since built its brand to the point that they now boast over 30 million subscribers. There’s no doubt that much of Netflix’s success is due in large part to the efforts of its founders, Marc Randolph and Reed Hastings. The original concept for a streaming service, like the one provided by Netflix, came about when one of Netflix’s founders was shocked to discover a large fee for an overdue video rental. Since its inception, the Netflix business model has been built around providing customers with an alternative to the traditional video rental system. Instead, customers can rent as many movies and as often as they like in a month, without fear of unjust overdue fees being thrust at them. If you prefer to hold on to the movies you rent for an extended period of time, or enjoy spontaneously streaming a movie to any of your devices, Netflix may be the subscription service for you.

While not immediately available after airing, Netflix does offer a wide selection of various television shows and movies. Due to the way television rights work, it can take anywhere from a few weeks to a couple of months for a show to appear on Netflix. As opposed to some of its competition, Netflix has begun to recently separate itself from other streaming services by also offering original content. Shows like the recently revived “Arrested Development” and the mini-series “House of Cards” are both only found in Netflix’s catalogue. Aside from its original offerings, Netflix boasts thousands of other pieces of content, ensuring that no matter what you’re in the mood for, Netflix is sure to have something available to suggest.

While it’s possible to sign up for a free trial with Netflix, users can expect a monthly bill of approximately $7.99, depending on the payment plan they choose to sign up with. In addition, it’s possible for users to choose whether or not they’d like to pay extra for the mail-in service. One of Netflix’s strongest areas is in its range of support for a wide variety of platforms. Whether you want to watch TV shows on your video game console, on the computer, or even on a peripheral like the iPad, you can do it all at the click of a button. While this accessibility does come at the cost of downloading the appropriate software, there’s virtually no device that Netflix won’t run on. 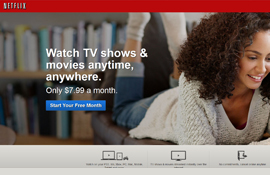 Netflix is available in a large number of countries, primarily in the western hemisphere. Thus far, participating countries include all of North and South America, as well as some European countries like the United Kingdom. Unlike some of its contemporaries, Netflix does not force users to watch commercials in between episodes of their favorite shows or scenes from their favorite movies. In fact, Netflix allows a wide range of commands to use on both television shows and films to ensure that you get to the exact parts you want to watch as quickly and seamlessly as possible.

As previously mentioned, there are a large number of services that Netflix offers to its customers that simply can’t be matched by its competitors. Whether you’re interested in getting early access to television shows and films that can’t be found elsewhere, or you’re interested in original content that Netflix has funded itself, there’s simply no other streaming service that can provide what they have to offer.

Of course, as with any streaming service, there will be inevitable disappointments. With technology moving at such a quick pace, it can be a little disheartening to wait for newer movies to arrive in the mail. While Netflix does have a substantial catalogue of available movies to stream, that doesn’t necessarily mean they’ll have the movie you want when you want it. Still, for its low cost and large selection of entertainment, there are few streaming services that can match its quality and affordability. In fact, visual media enthusiasts will be pleased to know that many of Netflix’s selections are available in HD in addition to regular versions. With the added bonus of a free trial offer, a Netflix subscription is virtually risk-free.