There’s a good chance that you’ve heard of Redbox. Basically, it’s a DVD, Blu-ray and game rental business that allows consumers to rent via kiosks. Redbox was founded in 2002 by McDonald’s Ventures, and its initial purpose was to drive more traffic to the McDonald’s food chain. The first two concepts of Redbox were tested in Washington, D.C. area, and they went under the names of Tik Tok Easy Shop and Tik Tok DVD Shop. By the time 2003 rolled around, there were more than 35 kiosks located in both Washington and Las Vegas, and this is when the name switched over to Redbox.

In 2004, Redbox became more popular. During 2005, there were Redbox kiosks located in Minneapolis/St. Paul, Salt Lake City, Baltimore, St. Louis and Houston. It was also in 2005 that Coinstar, Inc. bought into Redbox and began placing the kiosks at locations other than McDonalds. By 2009, there were 7,000 additional kiosks that began operating. The company’s 500 millionth disc was rented this year, and Redbox became the fifth largest movie rental company in the United States. As of 2012, there were more than 31,5000 Redbox kiosks, and the company had rented more than two billion discs.

The number of movies and TV shows that Redbox offers tends to change on a weekly basis. Each kiosk can usually hold up to 600 discs or more. When you rent a DVD or game from a kiosk, you don’t have to return it to the same kiosk. Because of this, the movies and games that are available for you to rent will be based on the kiosk that you go to. Many times, if you can’t find a particular disc at a certain kiosk, you can drive to another kiosk and find what you are looking for. 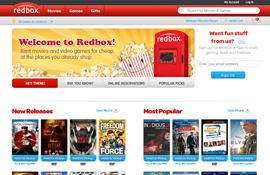 The most of Redbox’s marketing comes via SMS text messaging and email promotions. To receive such promotions, Redbox users have to provide their own email addresses, and if preferred, their mobile phone numbers. Renting DVDs, Blu-rays and/or games from Redbox is very advantageous and affordable. You don’t have to return your rentals to the same kiosk in which they were rented from, making Redbox very convenient.